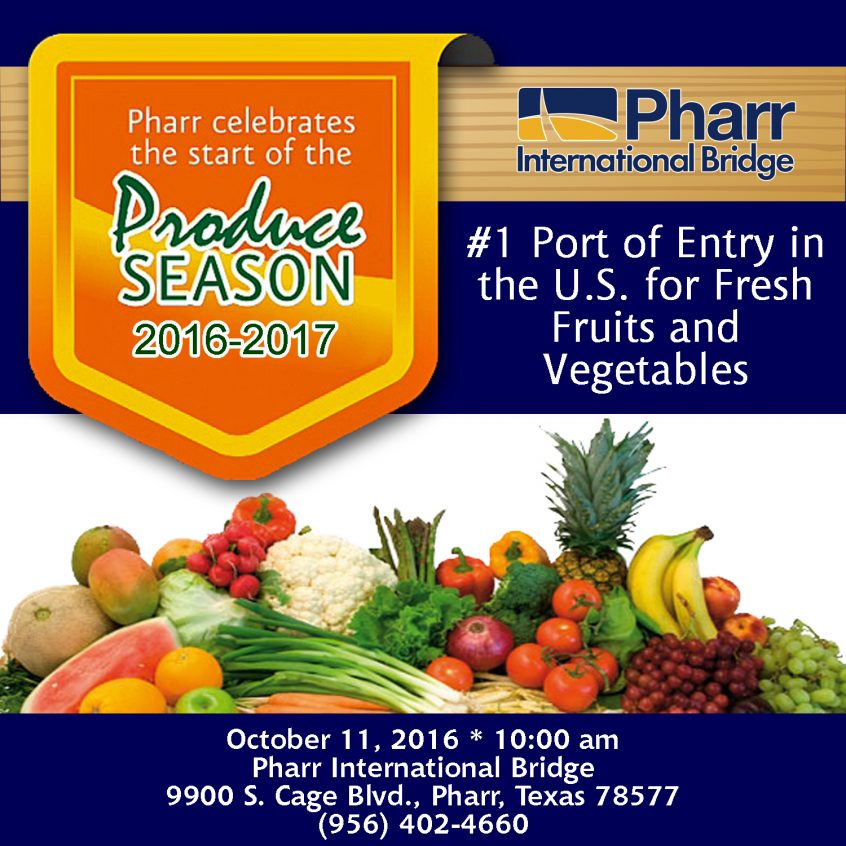 Pharr, TX – In anticipation of the start of the 2016-2017 produce season, The Pharr International Bridge will be holding a special event to commemorate the season with special guests U. S. Congressman Filemon Vela, Jr., Bret Erickson, President & CEO of the Texas International Produce Association, and Poncho Valdez de Marbram, President of Cluster Agroalimentario. The event will take place at 10 am on October 11, 2016 at the Pharr International Bridge (9900 S. Cage Blvd., Pharr, Texas.)

The U.S. has always been Mexico’s No. 1 trading partner for produce and goods. In particular, the Pharr-Reynosa International Bridge has evolved into the largest land port for fruits and vegetables in the nation. The city of Pharr has now surpassed Nogales, Arizona as the leading port of entry for Mexican produce and goods, thanks to the superhighway that reaches from the Panama Canal, into Mexico’s Pacific coast and over into the lower Rio Grande Valley of Texas. The $2 billion superhighway provides the country’s first major east-west corridor running through the middle of Northern Mexico. What was once shipped through Arizona will now take a shorter route east to South Texas – saving truckers an average of $3 thousand and 16 hours per round trip dependent on the final destination.

Pharr continues to break import-export records, crossing 60 percent of all fresh produce coming from Mexico. Pharr is the leading bridge for produce such as avocadoes and raspberries and number two for tomatoes.

Please see attached invitation. All media is invited to attend.

WHAT: Pharr Celebrates the Start of the Produce Season 2016-2017

Start of the Produce Season – Save the Date